Proclamation of the New Commandment of Jesus

Throughout His journey on Earth, Jesus, the Ecumenical Christ, the Divine Statesman, taught us lessons, parables and gave us examples of Divine Love and Justice, including the Law that is capable of transforming human beings forever and making them aware of the origin and purpose of their existence.

After almost two thousand years, Brazil was the stage for the revelation of a renewing and comforting concept: on September 7, 1959, in the city of Campinas/SP, Brazil, the late Proclaimer of the Religion of God, of the Christ, and of the Holy Spirit, Alziro Zarur (1914-1979), made the Proclamation of the New Commandment of Jesus:

“Love one another, as I have loved you. Only by this shall all of you be recognized as my disciples, if you have the same Love for one another” (The Gospel according to John 13:34 and 35).

The following text tells this story as registered in the first publication*1 of the Jesus, the Ecumenical Christ, the Divine Statesman, Academy, which was founded in 2007 by José de Paiva Netto, the President-Preacher of the Religion of God, of the Christ, and of the Holy Spirit and the President of the Legion of Good Will (LGW).

The goal of the Academy is to disectarianize the way some people see the ecumenical and eternal teachings of the Heavenly Academic in all fields of spiritual and human knowledge.

It also seeks to present Him in an irrefutable way to Humanity, in order to “show that there is no room for any unbridled campaign aimed at reducing the whole of the divine-human meaning of Jesus,” as the founder of this forum of ideas and studies puts it.

The Divine Wisdom of the New Commandment of Jesus

The president of the LGW, Paiva Netto, awakens in hearts the brave decision to practice Goodness, overcoming all kinds of adversity, having the New Commandment of the Christ of God as the driving force that propels us forward, despite any possible obstacle we might encounter. He says:

“Based on the extraordinary example of Jesus, all creatures of Goodwill become enabled to endure even pain and to leverage courage, achieving the victory promised by Him to those who persevere in His words, conduct, and works.”

We present some historical accounts from Paiva Netto about the Proclamation of the New Commandment of Jesus, taken from an interview he gave on December 23, 1983, in the city of Uberlândia/MG, Brazil, to reporter Toni, from Rádio Sociedade de Uberaba, during the LGW’s Jesus is Arriving International Congress; from his inaugural speech at the Alziro Zarur Auditorium in São Paulo on July 21, 1984; and from a talk he gave on the radio series “The Apocalypse of Jesus for the Simple-Hearted,” on January 24, 1991:

One of the most moving and decisive acts in History—time will prove it—was the Proclamation of the New Commandment of Jesus made by Alziro Zarur on September 7, 1959, in the city of Campinas/SP, Brazil, in the former Bonfim Racetrack―today Legion of Good Will Square―which at the time was the biggest public space that existed in the city with the capacity to accommodate the crowd that went there to hear him. Such an expressive page is the heavenly foundation of the Religion of God, of the Christ, and of the Holy Spirit, because it announces the Love of the Architect of the Universe*2 Himself, through His Son Jesus and through the permanent action of the Paraclete (or Spirit of Truth). The origin of all this is the Divine Goodwill*3.

The understanding that the immanent Wisdom of the New Commandment of the Ecumenical Christ, the Divine Statesman, gives us makes the incomprehensible comprehensible; the unbearable bearable. For this reason, when we refer to the Law of Christ in the Tratado Universal sobre a Dor [Universal Treatise on Pain]*4, we stress that if we live by it, we shall make the intolerable tolerable and even despair will turn into hope.

Zarur chose September 7, 1959 to explain to the peoples on Earth about the spiritual freedom, because he concluded that all political, social, and economic freedom is incomplete, or even false, if it is not enlightened by what descends from Heaven upon us:

September 7, 1822 is Brazil’s Independence Day. According to Brazilian historical tradition, Pedro de Alcântara (1798-1834), as prince regent, shouted on the banks of the Ipiranga River in São Paulo: “Independence or death!”

After declaring Independence, he became Dom Pedro I, Emperor of Brazil. In Portugal he was called Dom Pedro IV, following the death of his father, Dom João VI (1767-1826).

Joaquim Manuel de Macedo (1820-1882), a Brazilian novelist, doctor, journalist, and teacher of Geography and History of Brazil in the Colégio Pedro II, in his work entitled Ano Biográfico [Biographic Year], vol. III, records the famous phrase of Dom Pedro I when, on April 7, 1831, he abdicated the Brazilian throne―in the presence of Major Miguel de Frias (1805-1859), aide to Weapons Commander, Brigadier Lima e Silva (1785-1853)―in favor of his son, who at the time was just 5 years old and would become Dom Pedro II (1825-1891). The well-known author of A Moreninha says:

“To the surprise of those present he delivered to Major Frias the sheet of paper and declared:

‘Here you have my abdication.’

And, amid the silence of all and visibly moved, he said:

‘I want you all to be happy. I am going back to Europe and I leave a country I have always loved and love so much.’”

The Proclamation of the New Commandment of Jesus is celebrating 61 years in 2020!

Since this historic date in 1959, the Celestial Educator’s New Commandment has spread worldwide for all humanity to understand the meaning of the spiritual liberation and fraternity that is contained in this sacred teaching. Throughout his 63 years of work at the Institutions of Good Will, Paiva Netto has maintained his sublime commitment to globalizing this rule of Universal Solidarity, about which he says:

"The Spiritually Revolutionary New Commandment of Jesus is the structure of a new world".

Read more about the history and doctrine of the Religion of Universal Love!

Paiva Netto’s note
3 Divine Goodwill — Alziro Zarur taught that “Goodwill does not mean good intentions. Goodwill means good, solid, decisive will, sure of its purpose, illuminated by Truth and Love. It has nothing at all to do with good intentions. As shown in the popular saying, ‘the road to hell is paved with good intentions.’” Read more about the subject in Sagradas Diretrizes Espirituais da Religião de Deus, do Cristo e do Espírito Santo [Sacred Spiritual Guidelines of the Religion of God, of the Christ, and of the Holy Spirit], volumes 1, 2, and 3.

4 Universal Treatise on Pain —  Paiva Netto’s book published in 1990 and relaunched by Elevação Publishing House under the title Como Vencer o Sofrimento [How to Overcome Suffering], which sold over 250 thousand copies. 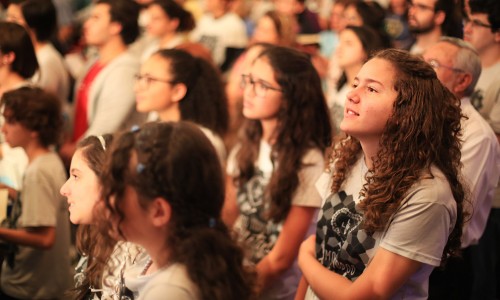 Youth debate the Apocalypse of Jesus in International Forum

A Culture of Peace for the end of intolerance 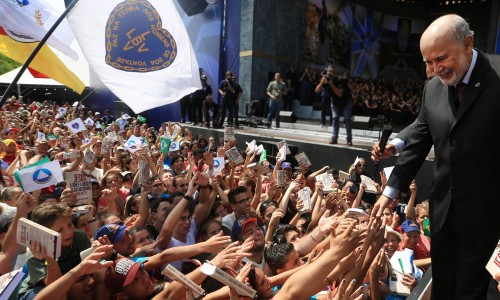