From prayer to practice: Find out how to bring it closer to you, as the Divine Master says in the Lord’s Prayer.

“In the Lord's Prayer, Jesus lays the foundation of the perfect Constitution for human beings and people on the Spiritual realm and the material plane. This is the Magna Carta of a truly civilized world.”

These are words from a speech by the President-Preacher of the Religion of God, of the Christ, and of the Holy Spirit1, José de Paiva Netto, which he delivered at a historical conference on December 21, 1989, in the city of Porto Alegre, Brazil. On that occasion, he undertook a detailed study of the beautiful prayer of Jesus, which became known as “Decoding the Lord's Prayer.” Read more about it.

A Bible study on the Kingdom of God

Based on this conference and on the teachings of Christ, we’ll conduct a Bible study about the Kingdom of God in order to help you understand this plea of the Divine Master: “Your kingdom come,” which we find in the Lord’s Prayer (The Gospel according to Matthew 6:9-13).

What does this actually represent? How is it possible to establish the Kingdom of God in a world filled with violence and with conflicting ideas and behaviors? Why isn’t it a divided kingdom? The violence that so often prevails on Earth demonstrates exactly the need for the Kingdom of God in our hearts. Can you imagine an entire civilization inspired by the true sense of citizenship that comes from the Heavenly Provider?

John, the Prophet-Evangelist, learned from Christ that the Heavenly Father is Love (1 John 4:16). For this reason, our analysis on His Divine Kingdom is based on this concept of Mercy and Justice.

How can we reach the Kingdom of God?

“The Kingdom can only come after we learn to sanctify the name of GOD by loving and respecting Him through His greatest work: the human beings and their unswerving Eternal Spirit, for without it the body is merely a corpse,” Paiva Netto affirmed in the “Decoding the Lord’s Prayer.”

Therefore, it (the Kingdom) begins with our willingness to improve, to live in accordance with the example of Respect, Goodness, Justice, and Love given by the Christ of God. Jesus believes that we are able to change and evolve, so much so that He guaranteed that it would happen, both in the Gospel and in the Apocalypse.

He Himself introduced His disciples and followers to the perfect notion of the Kingdom of the Heavenly Father by progressively revealing the all-embracing jurisdiction of this Heavenly Government.

“1) ‘Peace on Earth to Men [and Women] of Good Will’ (song of the Angels, announcing the birth of Jesus to shepherds in the field in the Gospel according to Luke 2:14);

This is the God who wants to be worshiped in Spirit and Truth, not in temples of stone made by the hands of men, but within the hearts of His children. For this reason, the Religion of God will not be based on appearances, on idolatrous paganism. Its altars will be the clean hearts of men and women of Good Will—the Good Will of God, Omnipotent, Omniscient, and Omnipresent.”

Therefore in our hearts is where we will first build this Kingdom of Peace, of Security, and of Love, which will be consequently established on Earth, since we shall be applying Christ’s warning:

“Seek first the Kingdom of God and His Righteousness, and all these things will be given to you as well” (The Gospel according to Matthew 6:33).

This is the teaching that Alziro Zarur conceptualized as the “Extremely Urgent Formula of Jesus” and that Paiva Netto also called the “Economic Formula of Christ.”

The late proclaimer of the Religion of the Third Millennium also explained:

“‘The Kingdom of God and His Righteousness’ is the perfect knowledge of the Immutable and Eternal Spiritual Laws that govern life on Earth.”

Knowing them will help us understand who we really are, where we came from, and where we are going.

However, this transformation is urgent. After all, there will be a moment when wickedness can no longer exist on planet Earth and the Divine Statesman will do as He promised in His Apocalypse:

“Look, I am coming soon! My reward is with me, and I will give to each person according to what they have done” (22:12).

Characteristics of the Divine Kingdom

We need to consider that along with its serious warnings, the Book of Final Prophecies points us to transformation as being a reality that will inevitably be fulfilled:

“The kingdom of the world has become the kingdom of our Lord and of His Messiah, and He will reign for ever and ever.”

“The nations will walk by its light, and the kings of the Earth will bring their splendor into it” (Apocalypse according to John 11:15 and 21:24).

In this Kingdom of Divine Justice, of Mercy, and of Love,

“God will wipe every tear from their eyes. There will be no more death or mourning or crying or pain, for the old order of things has passed away.” And also, “the city does not need the sun or the moon to shine on it, for the glory of God gives it light, and God’s Christ is its lamp” (Apocalypse 21:4 and 23).

Therefore, unlike what we see in the current construction of the history of Humanity, this is not a human regime that is subject to fear and oppression, criminally based on an image of the Heavenly Father, but with the imperfections and selfishness that are characteristic of human beings and not of Him.

Also a point to be highlighted is that, as God is Love, He desires good things for all His children. Therefore, this Kingdom is not restricted to just a few people or to a specific tradition. In the Book of Revelation, John relates the “Praise from the Great Multitude,” so much so “that no one could count, from every nation, tribe, people, and language” (7:9).

In other words, this is an ample, diverse, and accessible Kingdom.

Union between Earth and Heaven

In addition to what we mentioned before, we also need to open our minds to discovering new horizons, those where the Spirits of Light reside, the ones who wish to help us in our daily struggles. In this way, we shall be able to get closer to the Kingdom of God, which is already a reality in the Higher Spiritual World.

“Let us, therefore, enter into permanent harmony with those who are in the Higher Spirituality: the Kingdom of God, of the Christ, and of the Holy Spirit, or the Spirit of Truth or Paraclete, who comes down to us, as in the comforting description of the New Jerusalem (Apocalypse 21:2 and 10):

‘2. I, John, saw the Holy City, the New Jerusalem, coming down out of heaven from God, prepared as a bride beautifully dressed for her husband.’

‘10. And he carried me away in the Spirit to a mountain great and high, and showed me the Holy City, Jerusalem, coming down out of heaven from God,’” says Paiva Netto in his article “Entering into the Silence of the Spirit.”

We see, then, the importance of the prayer, especially of the Lord’s Prayer, which places us in the ambience of the Kingdom of God and prepares us for experiencing it. That is why we invite you to pray and raise your thoughts to the Heavenly Father.

2 Words of Alziro Zarur, published by writer Paiva Netto in the Sagradas Diretrizes Espirituais da Religião de Deus, do Cristo e do Espírito Santo [Sacred Spiritual Guidelines of the Religion of God, of the Christ, and of the Holy Spirit], volume I, page 169. 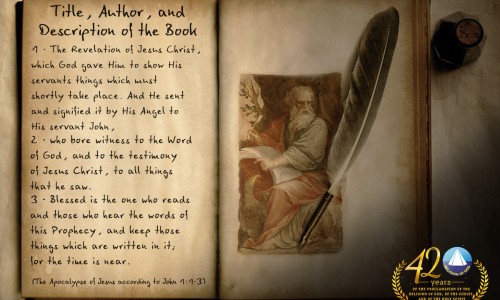 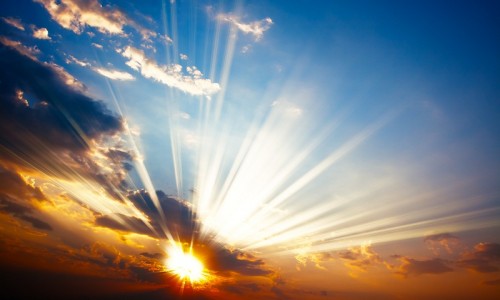